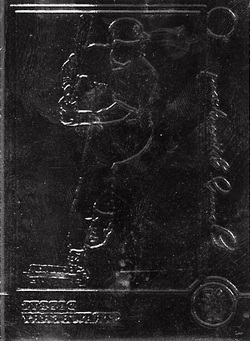 Some 1998 Bowman Chrome "proof" cards have shown up on ebay.  Sellers may claim that these cards were acquired from former Topps employees and that these apparently incomplete cards were used in proofing the cards before production.  It is impossible to disprove this claim, however it seems very unlikely as I was able to make my own proof cards in my kitchen at home! Simply soak a card in warm water and then the paper card stock starts to fall apart.  The warm water loosens the adhesive used to glue the card front to the card back, and what remains is the thin chromium card front with a very shiny, etched background.  A cool card for sure but also an easily recreated one.....

These Robbie Bell and James Manias "Proofs" were made in my kitchen.

In Topps/Bowman products produced after 2000, some of the rare serial numbered bowman chrome inserts were withheld from packs to be able to offer as replacements to customers who received damaged cards in packs.  This does not appear likely to have happened in 98 bowman chrome, and I believe that all of the golden anniversary cards were packed out and not withheld.  I have collected one of each serial # 1-50/50 for series one, and  now  one of each serial # 1-50/50 for series two.  If cards were withheld then cards of various serial #'s composing one or more backup sets would have had to be pulled; this seems unlikely.  It is also possible that a single serial #'d set was withheld (ie a complete set of cards all #12/50) and some of these cards were sent out as replacements or found their way onto the market by other means.